While I shot over a thousand pictures I’ll limit these posts to what’s not typically covered in the general aviation press. This is part I of my Aero report, enjoy the read!

The holy grail of composites are structures made of one single part. While this is rarely achievable in the real world, huge potential improvements are on the table, resulting in less weight, less man hours and less cost. I am not the only one who thought so.

The Taragon wing (above) was a cool display of a conventional composite wing, or black aluminium as it’s known in the composite industry. Two spars, 4 stub spars to mount the landing gear onto, many ribs, bolted connections etc.

The German Akaflieg Braunschweig showcased part of the SB15 fuselage that was made in one part.

Elixir aircraft took it one step further. They made both their fuselage and the wing in one single part, though their approach only works with very pricey prepregs.

Interestingly, part of their crew were ex-Dyn’Aero people, who’s designs I’ve always loved. This was one of the most promising designs present on the aero. So far, they only aspire to bring it to market as a certified design, selling for around 150K€ excluding VAT.

It is often said that your second or third designs can be much better than your first. This clearly showed in the Elixir, carrying a lot of the good features of the Dyn’Aero designs over and only changing design where improvement was achievable.

There is always a few new amphibians. Hottest one on the Aero was the Norwegian Equator.

As is clear in the picture above, the cockpit is enormous, about 1.5 meter (60″) wide. A bit too wide for my taste, especially since the visibility over the opposite side of the nose was hindered by the raised side walls. With an empty weight of 650 kg (1430 lbs), this showed in the structure too, although it was said a lot of weight could be trimmed from the wings too.

The engine is a 32 kg (86 lbs), 125 hp water-cooled electric Engiro M97. With about the same weight in batteries installed, later a 60 kW Wankel/generator combination by Engiro was planned to be added, adding another 70 kg (154 lbs) or so.

Engiro; a manufacturer of electric motors and hybrid drives shared the stand with Equator. Their 20 kW Wankel/generator combination would be appropriate to a lot of airframes, combined with batteries for take-off and emergency power. 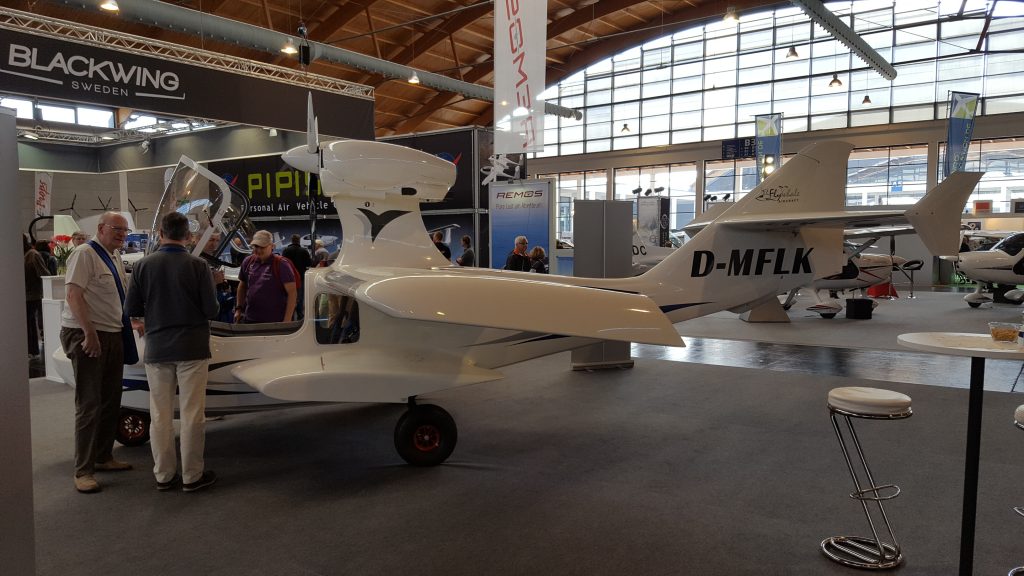 The Fly Whale was a good looking design, though how that name got past the marketing department is beyond me…

Several design details showed impressive engineering. The main landing gear has very simple hinges, while the nose gear is raised with a vice instead of the usual myriad of complexity.

The Finnish Atol (above) and the Hungarian Odonata seemed to be utterly deserted after they appeared on the Aero several times over the last few years.

Compared to the massive presence of two-seat aircraft, be it LSA’s, kits or microlights, there is only a modest presence of single-seaters.

The SD1 has been pretty popular, due to it being fairly affordable. What didn’t hurt is that it’s available from an almost plans-built budget-friendly package to a quick-built but much pricier kit.

SD also showed their SD2. This wood/composite two-seater will only be available as a complete microlight, with the reasoning being that most of the SD1 customers went for the pricier but mostly-built version, so the commercial potential was more towards more expensive but faster flying airframes.

This seems a common theme in “affordable” aircraft, the ones on the very bottom of the price range draw most of the attention, while most of the actual sales and builds are at a higher price point where build time is much lower.

SD expected a kit to be available a few years down the line.

I’ve always been a fan of the Song. With it’s motorglider like span and full monocoque construction, it is still light enough to fit in the 115 kg class.