While I shot over a thousand pictures I’ll limit these posts to what’s not typically covered in the general aviation press. This is part III of my Aero report, enjoy the read!

The big picture – where is GA tomorrow?

This is probably the most asked question after you return from a trade show. Some things never change. The established LSA/microlight manufacturers (Pipistrel, Tecnam, Flight Design, Remos), high-end piston manufacturers (Cirrus, Diamond) and turboprops (Pilatus, Socata) as well as the big 3 sailplane manufacturers (SH, AS, DG) are good and steady, but improvements and new designs seem to come at a glacial pace.

As every year, there are quite a few single-seaters exhibited. As endearing as they are, it seems that most end up costing not that much less as a two-seater and that by then customers prefer the latter. Below the Merlin is pictured. It’s advertised as 35K euro’s for the quick-build. It would be interesting to see whether people are willing to pay that much money for a two-stroke single-seat aircraft

There is your usual bunch of new (and not so new) starry-eyed guys with a new flashy composite two-seater. Whether it’s a side-by-side or flashy tandem, they invariably come in with big promises, flashy (or borderline lowbrow) promotion and unrealistic perceptions of the realities of bringing a new design to market. That shows in their designs, the big picture looks great, detailed engineering and production quality is often disappointing, while they are usually heavy and under-performing. Dependent on how deep the pockets are, the design disappears from the market a few years later or is sold to another starry-eyed guy with new deep pockets.

Obviously there are exceptions. The Elixir has an experienced team focusing on the right things (certification and reducing man-hours). It is a pleasure to see someone take a radical step in production without loosing sight of what’s realistic.

Electric propulsion is maturing quickly, but at the same time it’s becoming obvious that electric will only work for those segments of aviation where (powered) range is no requirement like sailplanes, aerobatics and potentially flights schools and it seems the action is focusing more and more on those areas.

Hybrid “solutions” are comparatively behind and still seems to be mostly one company, Engiro. I was surprised by that, with today’s prices for engines, a hybrid combines the best of electric propulsion with the range of a reciprocating engine. Better; you can use a car or industrial engine in an aircraft without having to worry about torsional vibrations or gyroscopic crankshaft loads. Seems there is a lot of market potential for those who can come up with a complete hybrid package.

It’s a pity that water-flying isn’t bigger in Europe. The Icon made big waves in the US, but after spending 150 million US$ over a decade, they still have to deliver the first customer plane. In the mean time, several promising amphibian designs have been frequenting the Aero. I can’t help but wonder whether with a bigger European water-flying community those designs would be selling like hotcakes. Now the Atol 650, Flywhale and Equator seem to be financially tight enough that certification and production start takes a long time perhaps never to materialize.

Side by side cockpits

Most powered aircraft have a side-by-side cockpit, with tandem (occupants sitting behind each other) being more rare. On most sailplanes it’s the other way around, because the lower frontal area has less drag.

Theory shows that this doesn’t have to be the case and in fact the Stemme S10/S12 and the Akaflieg’s B13 and D41/D43 have comparable frontal area to tandem seat sailplanes by reclining the pilots.

The Aero is always a good opportunity to compare a few actual cockpits. 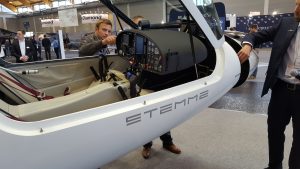 The UL39 was designed with the explicit goal to build an airframe that resembles a jet in it’s looks and flying characteristics, but stay within the price range of a typical light piston aircraft. The ducted fan doesn’t distract at all from it’s jet-like feel.

Much harder to capture, but the Aero is also an opportunity to meet friends from far away places and make new ones that don’t live conveniently nearby. 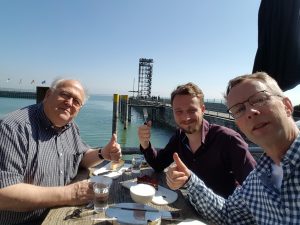